Mountain biking over the Black mountains

How do you grieve for a friend? Well this ride is my way of paying homage to a colleague who passed away last year near Talgarth, we don’t know how he died and it doesn’t really matter, the fact is, he isn’t with us anymore, and everybody misses him. So here we go, there’s a few firsts on this ride; first time in a bothy, and first time for my mate riding across country devoid of roads. We are going to ride along two old railway paths, with the first being the old Mid Wales Railway leaving Builth Wells to Talgarth, then we climb the Rhiw Cwnstab mountain and later join a supply railway in the Black Mountains used for the construction of Grwyne Fawr reservoir dam. 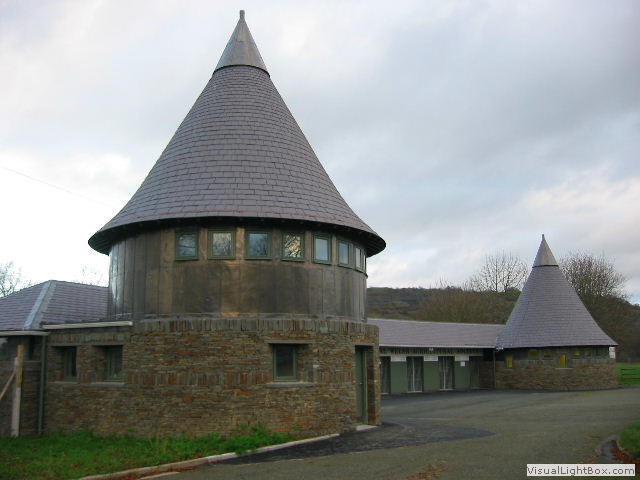 We caught the train from Abergavenny to Builth road station (via craven arms) arriving 1230. We were just coming into spring, but it didn’t feel like it. We stepped off the train and waited in the shelter until the hail and sleet stopped. From here we join the main A470 and headed for Builth Wells, going past the Royal Welsh showground, then we jumped off the road at Builth Wells to join the old Mid Wales Railway trackbed which follows the Afon Gwy (or river Wye) south. The river was roaring along beside us and almost as soon as we joined the railway route, we’re back off it again, on to the B4567 which now parallels the old line, and the river. Five miles out from Builth Wells the trackbed cuts right through the motte of Aberedw castle (Victorian railway progress was absolute, even through older remains). It’s not possible to accurately date the castle (now rubble), though theories suggest it was founded around 1093 when the Normans launched a concerted invasion of South Wales. 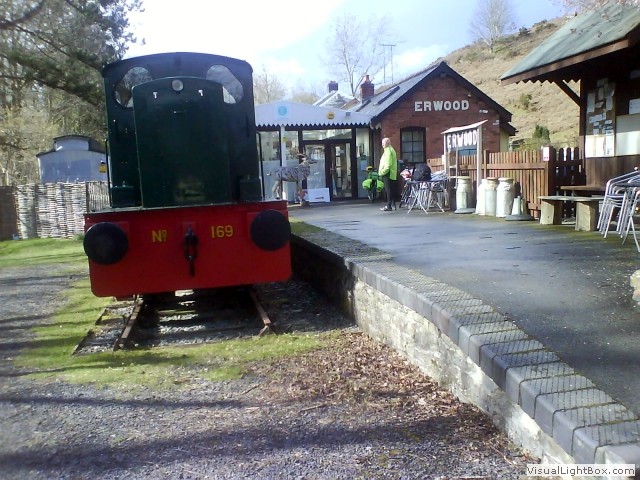 We popped into Erwood station café for a coffee, but alas it was shut (which was going to be the theme of the next few days) and after turning right, the road and railway become one. It’s not uncommon for a road to take the exact route of an old railway line (as the ground work is already done). This route isn’t as flat as I remembered, as it veers away from the railway trackbed, but we followed a lovely car free lane to Boughrood. Crossing the river Wye on a toll bridge, turning left onto the A479, then all the way to the Honey café (quite a famous café, but expensive) where we have our first tea and toast and dry out from the cold rain. Onto the A479 passing Bronllys Castle on our left, shortly after we ride into Talgarth. Talgarth was the capital of the early medieval Welsh Kingdom of Brycheiniog, and has a tower near the bridge to guard the crossing, there’s a nice clock tower on the Victorian Town Hall that overlooks the Square and a refurbished flour mill next to it. Though on a sodden day in mid March there seems to be something missing; the people, it’s a ghost town, everything is shut.

Tonight, we’re staying gratis at an old manor house, set up by a friend, and we virtually had the whole house to ourselves. After a pleasant shower and dinner we grappled the remote control on the TV, but were unable to get it going, so we sat in the dark watching the log fire crackle and hiss, putting the world to rights until bed time. 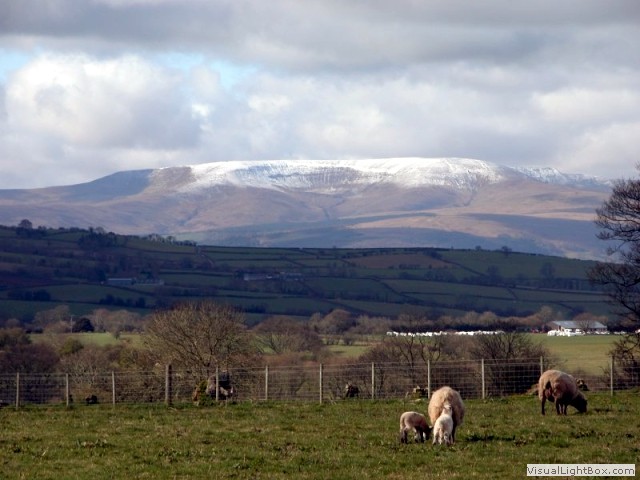 The rain battered the windows all night, but I was shocked when I looked out of the bedroom window in the morning and saw the snow capped mountains in the distance (exactly where we were heading), but at least it wasn’t raining (yet). We set off from the manor house and headed back to Talgarth just a few miles away, to hospital road and passed the Mid Wales Hospital, originally the Brecon and Radnor Joint Counties Lunatic Asylum. What a sorry state this massive site was in, looking like something out of the film ‘28 days later’, it could've been made into something quite nice, but now it's derelict. As we continued, the roads had torrents of water running down them, carrying loads of debris from last nights rain, it was hard work as we climb 650 feet in two miles to end today’s road section near Penrhos. Now, the going gets really tough, it’s totally off road. The first bit is boggy grassland, I didn’t like this at all, some stages when I pedalled, my feet were completely submerged in the water. Then its onto a steep grassland slope, before eventually reaching the bridleway on the Rhiw Cwnstab mountain. 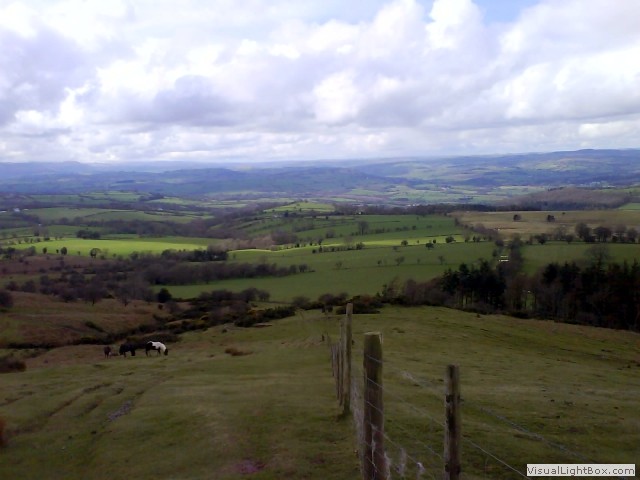 It began to rain heavily, dropping the temperature, hindering our progress. Most of the stuff we needed for tonight’s stop was on my bike making it heavy. My mate had to go ahead, leave his bike, and then come back down and help me push mine up. When we turned a corner the incline became steeper and we could only progress a few feet at a time and then rest. By the time we reached the top the rain had stopped and had melted the snow from last night. When we finally took some respite and sat down, nothing could prepare us for the views, they were simply breathtaking; looking north east is the crenulated slopes as far as Twmpa. Looking backwards to the north is a patchwork of fields and moorland sloping down to the River Wye with the hills of mid-Wales rising beyond. To the west, it’s even more striking; we’re looking at the northern escarpment of the Brecon Beacons. As we ascend the path now becomes engraved into the land, torn apart by off road vehicles, making countless loose ankle breaking football size boulders. We began to descend on a treacherous path laced with slippery flat stones, then the terrain changed to bog. At last we're back on the bikes and hop across loads of streams crossing our path. We could now see the tail of the reservoir and it’s only about half a mile to the Grwyne Fawr Bothy, our stop for the tonight. The bothy is near the stream about 100 metres down below us, too steep to take the bikes down, so we chained them against the fence and walked down the sheer slope with our bags, and the logs. 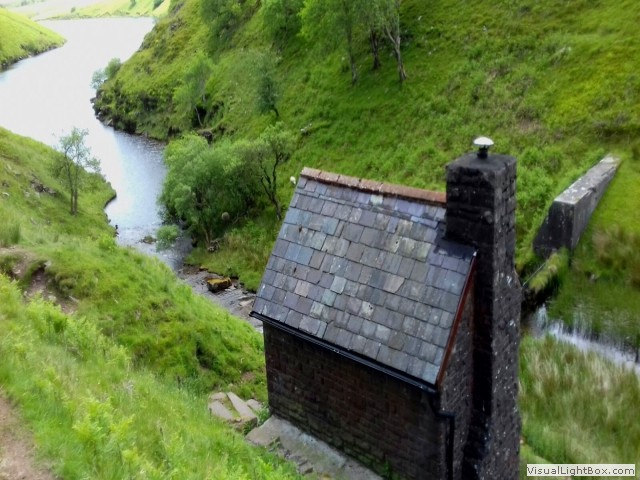 When we got to the bothy we were cold and soaked through, but we had a clean dry change of clothes and dry footware. As the sky darkened it got colder, revealing our worst case scenario; a clear sky, good for stargazing, but not good to keep the ambient temperature moderate. We had brought six logs with us, and there was some logs kindly left by someone. We lit the stove, prepared a brew, and put our wet clothes cautiously around the fire, it didn’t take long for the little structure to warm up. The dried pasta and mushrooms went down well with two small bottles of red wine I’d sneaked into the panniers. The blackness of night quickly closed in, it was as dark as I've ever seen. We sat there on the two resident chairs and talked until we were tired, it’s hard to believe at this very moment, there’s so much conflict going on around the World, here, we’re in our own bubble of tranquillity. All we could hear was the sound of our voices, the fire cracking and the babbling of the brook next to the bothy. It was time to sleep, up a ladder was the sleeping area, and it didn’t take long for me to nod off. On the other hand, it didn’t take long for me to wake back up either. There were no roads, no people, no trees around (and therefore no bloody hooting owls), it was quiet. In fact, this must be the quietest place on the Planet, but I was next to an incessant snorer, making the bothy rumble. I went back down the ladder for my ear plugs, put the last log on the fire, went back up the ladder and nodded off again.

In the middle of the night the stove had lost its warmth with the last embers dying while we slept, but we had no more wood to relight it. The temperature began to hastily drop, each breath passed a white vapour into the air. My teeth began to gently chatter, so we stripped off and put our now dry synthetic base layers back on followed by all of our other clothes, then we climbed inside our sleeping bags cocooned by emergency pastic bags. It's difficult to maintain warmth after a lot of hard effort, I later discovered it was minus 4°C (nothing to the hardened mountaineer, but bloody freezing for two porky City slickers). 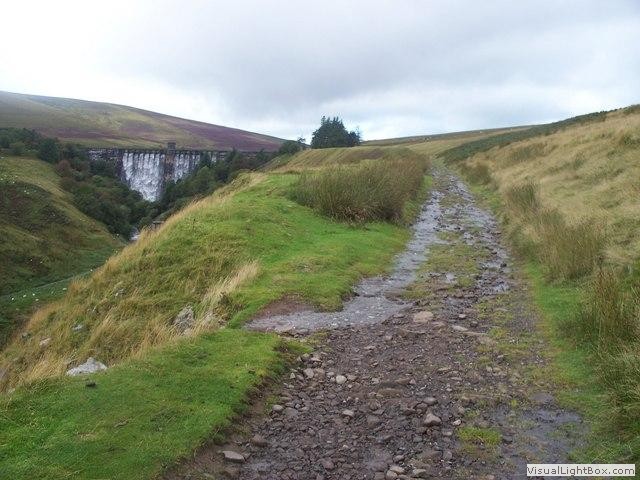 We re-dressed in the morning and had porridge and a brew on my gas cooker. We waved goodbye to this idyllic little abode and climbed back up to the bikes, before long we were tottering along the old railway trackbed. Ten minutes later, we stood on top of the dam and looked down, a scary sight. From here, it’s back on the old railway track bed that once provided all the construction materials for the Grwyne Fawr reservoir dam. There were two levels of the railway; the lower one supplied the bottom of the dam. On the low level were a few derelict buildings which used to be the formans building and mess room for the builders while the erection of the dam was in progress. Once the dam was complete, the rails were ripped up leaving a progressive downhill gradient for us, but a bumpy one, reducing the speed to a crawl. We soon match up with the low level road where the Grwyne Fawr trickles obediently along next to it. Like before, the road is now overlaid with the route of the railway, and we are now motoring downhill on tarmac at a fair pace.

We pass a tabernacle sign, so back tracked to see this little church. At a star shaped crossroads the old supply railway would have went straight on to join with the GWR at Llanvihangel Crucorney, we turn right towards Forest Coal Pit and through Bettws. It’s downhill all the way to Pantyglli where we turn right to join the ‘old Hereford road’ and then past Triley Court a classical Georgian mansion. It’s a short distance now to Abergavenny and to where I parked the car.

We’re not experienced mountain walkers and neither are we mountain bikers, but we did our research (including the predicted weather) and spoke to a few people who’d done the walk, but sometimes it just needs a leap of faith, though it’s easy to see how people become statistics of the mountain rescue. This wasn’t a simple ride, it was very challenging, if you divided the effort we put in with the actual mileage this was probably the hardest little excursion we’d done, maybe we underestimated how steep the roads were leading to the mountain. The last bit up to the top of the mountain was so hard we averaged less than 1 mph, it took us three hours to do the two miles to the bothy, but without some sacrifice it wouldn’t have been worth doing. It was an achievement, and it’s amazing how much pleasure can be attained by the magnificent views and the unvarnished little bothy, (my first, but not the last). I have now paid my respects to honour a former colleague and friend, and I can recall fond memories of things we shared together. Good bye Dave-the-rage.